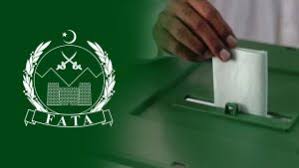 Historic election held in Pakistan’s former tribal districts
Millions were expected to vote in elections for the first time since Pakistani constitution was extended to region.

by Asad Hashim
6 hours ago

Islamabad, Pakistan – Pakistanis in the country’s northwestern tribal districts have voted in provincial elections for the first time in the country’s history, marking a key step in the merger of these areas into Pakistan’s administrative and constitutional mainstream.

Polls took place across the seven districts that composed the former Federally Administered Tribal Areas (FATA) on Saturday morning, with 16 seats in the Khyber Pakhtunkhwa provincial assembly up for grabs.

FATA, where the Tehreek-e-Taliban Pakistan (TTP) once thrived, was ruled directly by Pakistan‘s president under British-era colonial laws until last year, when the territories were merged into Khyber Pakhtunkhwa province by a constitutional amendment.

The move fulfilled a long-standing demand in the tribal districts, home to some five million people.

“We are very happy to vote in the tribal areas for the first time in elections for the provincial assembly,” said Rahidullah Afridi, a 29-year-old voter at a polling station in Jamrud area of Khyber district.

“We are getting an opportunity to get the same rights as all other people [in Pakistan].”

More than 280 candidates, including two women, are standing for election, according to Election Commission data. The majority of the contenders are independents, but all the major national parties are represented in the historic polls.

Some 2.7 million people were eligible to vote, with large turnouts reported at polling stations as polls progressed through the day.

Composed of seven main districts, the territories flank Pakistan’s border with its northwestern neighbour, Afghanistan. In the past, they have been a haven for armed groups such as the TTP and its allies.

A series of military operations undertaken since 2007 has seen the country retake control of the districts, with most remaining elements of the Pakistani Taliban driven into Afghanistan, according to the Pakistani military.

Afghanistan and the United States, however, allege that elements of the Afghan Taliban continue to find safe haven in parts of the region.

‘More energy’
The merger of FATA and the extension of regular Pakistani law and constitutional rights has been a controversial subject since it was passed in May last year, with many residents of the former tribal districts complaining that nothing has changed on the ground.

“We have not seen any real changes so far,” Afridi said. “Right now, it is the same old and corrupt system from before, including the [colonial laws],” he added. “No changes have come, only the names have changed.”

Afridi said he had voted for Prime Minister Imran Khan’s ruling Pakistan Tehreek-e-Insaf (PTI) party in previous elections, but that this time he was voting for an independent candidate.

Unofficial election results are due to come in after polls close at 5:00pm local time amid tight security [Hameedullah Khan/Al Jazeera] [Al Jazeera]

The same sentiment was also echoed by others in Jamrud, with some voters saying they were backing independent candidates against the mainstream political parties.

“Today we are seeing even more energy [at the polls] than we saw in the general election,” said Shahji Gul Afridi, 50, a former member of parliament whose 25-year-old son Bilal was standing in the election.

“Men and women are both participating, it is an atmosphere of happiness.”

Women’s political participation has historically been low in this socially conservative belt of the country, although there were two female candidates standing in Saturday’s polls.

“I am breaking the chains [for women] and there will be more women after me taking part in elections in the tribal areas. This is the first step of change.”

Unofficial election results are due to come in after polls close at 5:00pm local time (12:00 GMT) on Saturday, the Election Commission said. Officials figures are likely to be announced by Sunday.

61,000 refugees stranded at the Jalozai refugee camp, run by the UNHCR